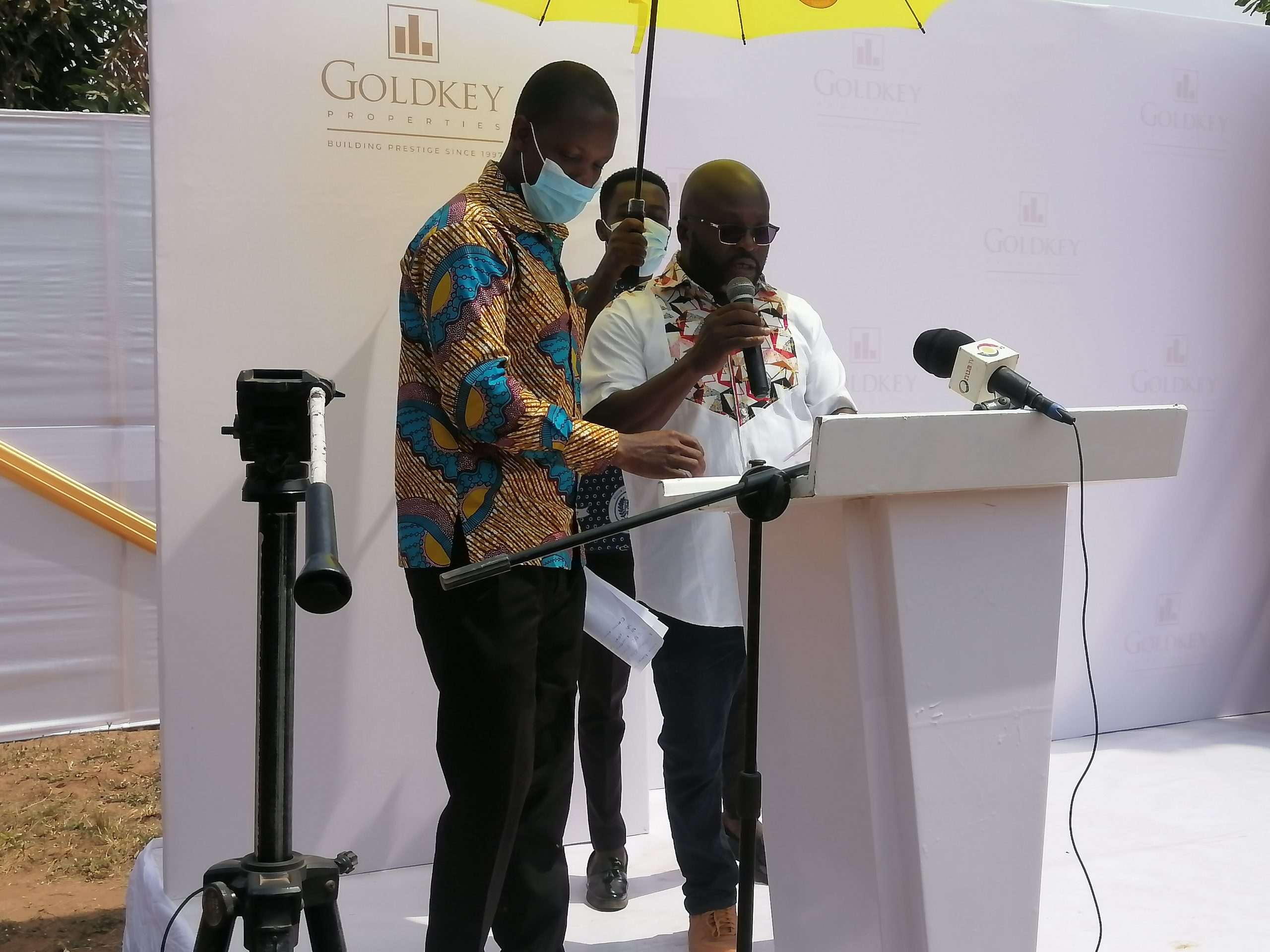 The Yilo State Basic school in the Yilo Krobo Municipality of the Eastern Region has received a massive facelift as the structure has been refurbished and handed over to the School. The commissioning ceremony was held at the forecourt of the school by Goldkey properties as part of their 25th-anniversary celebration on Friday, January 21, 2022.
The structure which was in a dilapidated state and was on the verge of collapse has received the support of Goldkey properties, a subsidiary of CH Group of companies after TEAM CSR, a local Non-Governmental Organization appealed to them to help refurbish the structure to enhance teaching and learning. According to the CEO/Founder of the NGO, Mr. Jonathan Akuamoah, his attention was drawn by the Queen mother of Salosi, Nana Awo Otinor I who hailed from the area. "After appealing to Goldkey for the support they allocated close to 100,000 Ghana cedis to refurbish the 3-unit classroom block, refurbish and paint the entire blocks" he added.
The school authority says, hitherto, they have limited classrooms to the extent that one of the classrooms accommodating special education in the entire municipality has to be released for the Junior High School and that this has given them and the student populace a sigh of relief. Mr. Alex Dordor who spoke on behalf of Goldkey said, the company is committed to developing people from the younger ages and even though they have a lot of proposals at their disposal with respect to the school building, Yilo State Basic school was selected as one of those that needed urgent attention. In addition, Goldkey has donated four (4) dustbins to help keep the school compound clean. The euphoria that accompanied the commissioning was so great and refreshing. 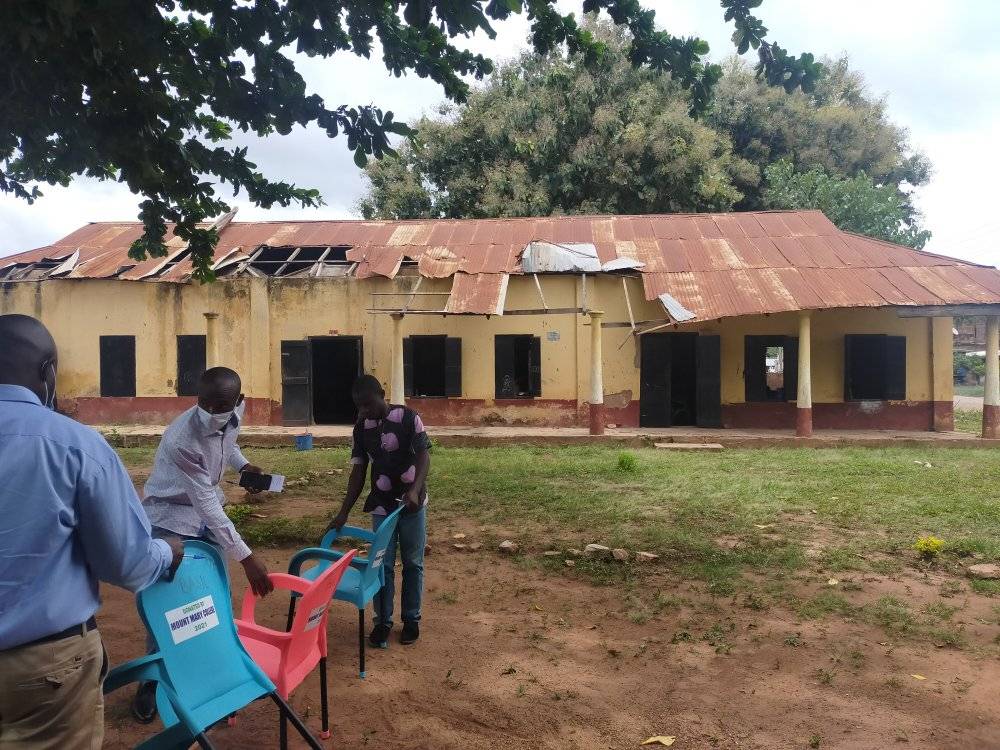 Ghana is a lovely place with gorgeous beaches but as soon as you leave the major cities you see just how many people are in need. I thank God for the opportunity to come back to my country after over 40 years in the States to make an impact on the lives of my people through my non-profit/NGO. We were able to raise over 20,000 dollars to refurbish this school building through our corporate partners. I can't wait to see the smile on the kid's faces when they return to. the class next week. The first two pics are the actual building they attended classes in and the last two are the same building after we refurbished it. The image on the left is before the building was renovated on your right is after renovation. 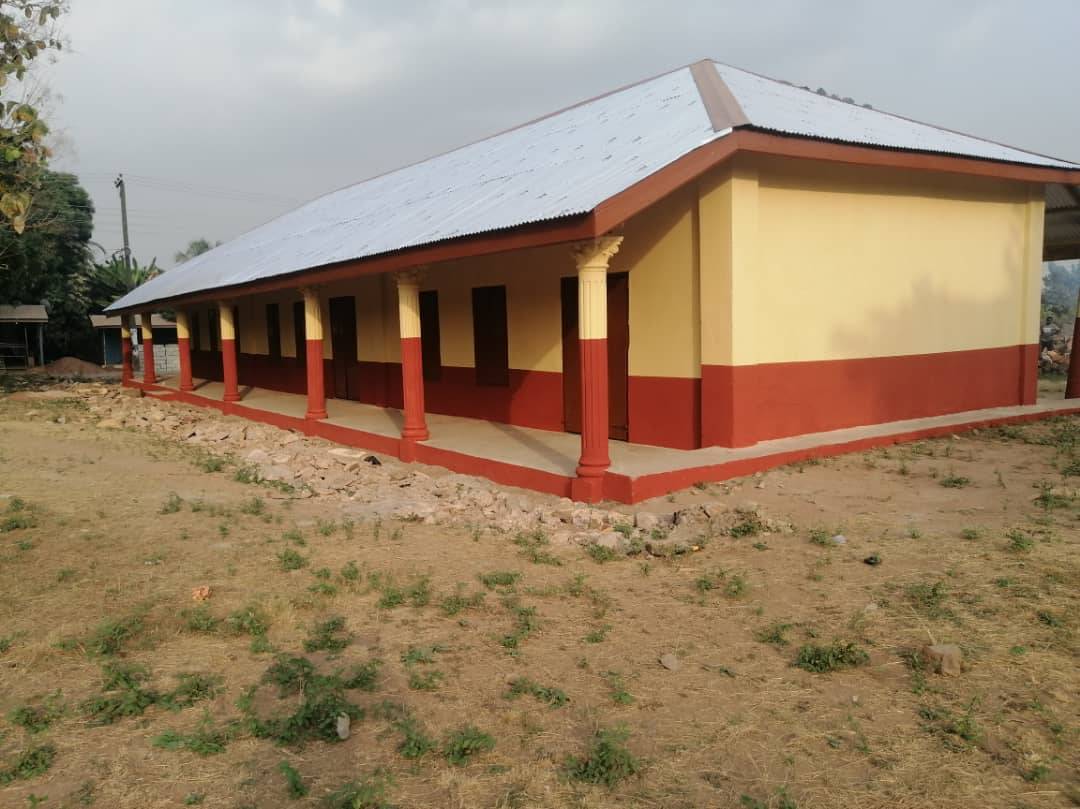 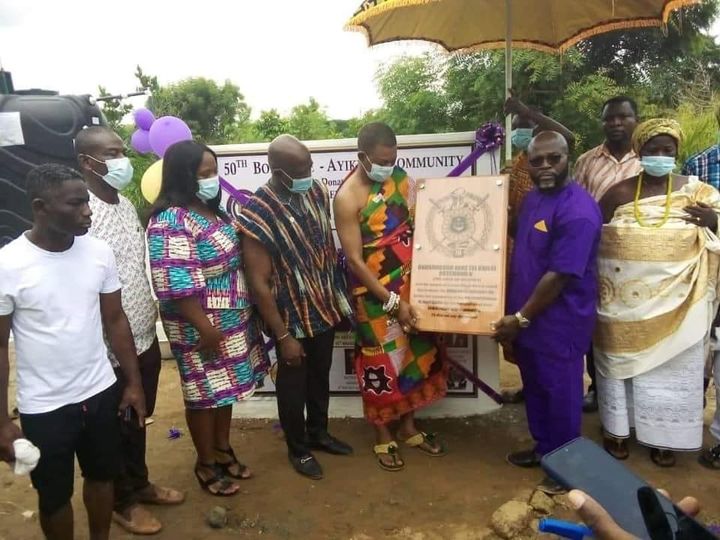 Omega Psi Phi fraternity Inc partnered with my Non-profit TEAM CSR Ghana in it's Water For Life Initiative. My beloved Fraternity pledged to do 24 boreholes. With an outpouring of love for the motherland and Ghana specifically, Omega men, chapters, Districts and individuals have donated 50 boreholes to 50 communiites and provided access to safe drinking water for over 100,000 people in Ghana
at a cost of over 200,000 dollars. We commissioned our 50th borehole with the media, chiefs and government agencies. The real story is the people who will now have access to water and help curb illnesses, deaths and the high infant mortality rate caused by the drinking of unsafe water. May God bless OPP and our brotherhood. 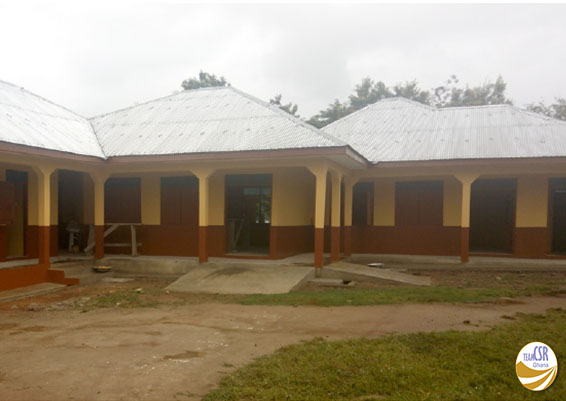 GOLDKEY PROPERTIES
A division of Portnam Group which consists of companies such as CHASE Petroleum, Goldkey celebrated their 20 year anniversary by contracting TCSRG to locate a sustainable and impactful project that would benefit a community in need. After the vetting several communities, Goldkey Properties decided to the community of Breman Jamera in the Central Region.... read more

DR. AND MRS. LESLIE DODOO
Dr. Leslie Dodoo and his wife enlisted the help of TCSRG to assist in the Education of the brilliant but needy girl child in Ghana. Dr. Dodoo is a Ghanaian raised in the USA based in Irvin Texas and a member of the Omega Psi Phi Fraternity. He embarked on a mission to sell made in Ghana book bags using most of the proceeds to support his education scholarship initiative in Ghana... read more
THE SPINAL CLINIC LTD
Dr. Bryan Cox an internationally recognized and celebrated Chiropractic practitioner enlisted the service of TEAM CSR Ghana to identify a community in need of safe drinking water and manage the construction of a borehole for the community. TCSRG identified the community of Adomi in the Volta Region as the people in the area was using the lake banks for washing , drinking, and bathing.... read more 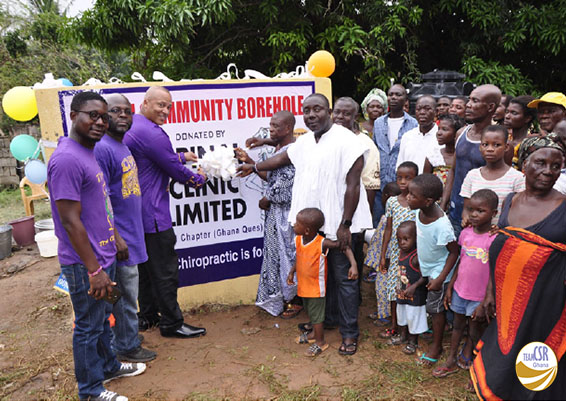 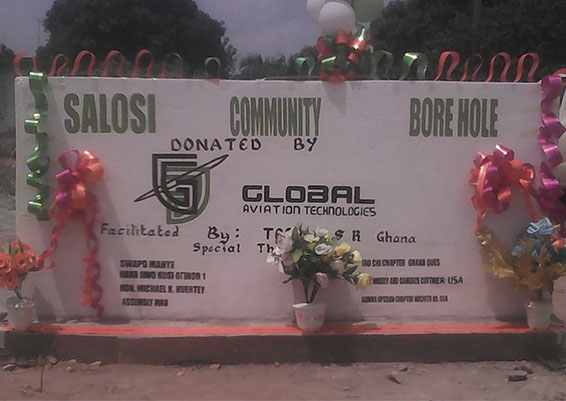 GLOBAL AVIATION TECHNOLIGIES
In 2015 a company based in Kansas, U.S.A called Global Aviation Technologies contracted TCSRG to provide a borehole for a small community called Salosi in the Eastern Region. The community which was using a small stream as a base for providing drinking water, washing and bathing was in great need prompting the donation by Global Aviation Technologies... read more
OKYEAME KWAME FOUNDATION
TEAM CSR Ghana has been fortunate to be associated with one of the biggest and most popular musician in Ghana, Okyeame Kwame and his Foundation. Not only is Okyeame Kwame a music Icon and celebrity in Ghana with his music spanning decades but he is also committed to giving back to communities with one of his major philanthropic work the... read more 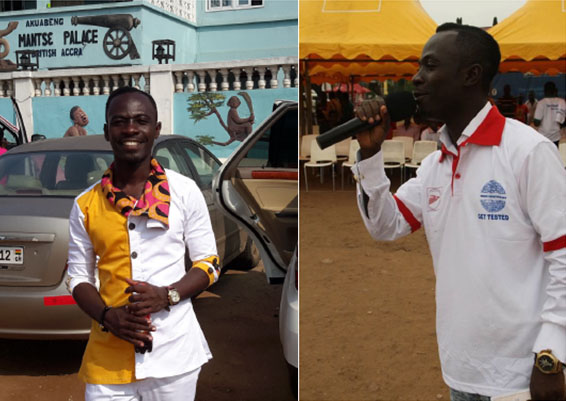 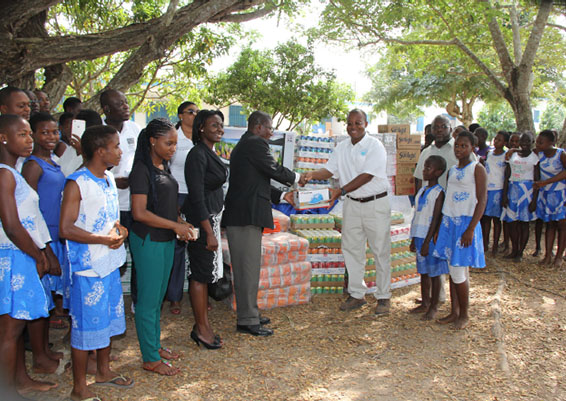 CHASE PETROLEUM DONATION
Again in 2015 TCSRG friends and supporters at CHASE Petroleum enlisted the assistance of TCSRG to locate a worthy NGO to make a major Holiday donation. From all the NGOs presented CHASE decided to help the children of Village of Hope Orphanage for the amasing work they provide to abandoned children. TCSRG coordinated a program at the Orphanage for CHASE Petroleum... read more 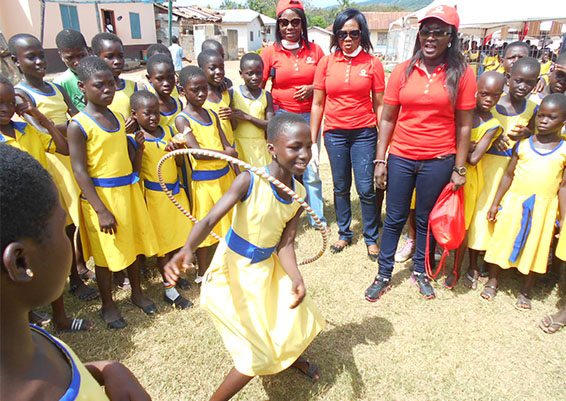 VODAFONE GHANA
division of Vodafone a multi-billion dollar Telecom giant based in the UK, Vodafone Ghana , contracted TCSRG to provide project management of a volunteer initiative for their staff, Board members and executive team. TCSRG identified a local community library in Senchi near the Volta lake for the volunteer initiative. The library was in disarray and was not in operation because of lack of funding... read more
WATERAID GHANA
division of WATERAID International based in the UK and Canada with other divisions Global, WAG contracted TCSRG to provide an assessment of funding opportunities and funding landscape document both locally and international for its WASH projects and the organization as a whole. This in depth document required TCSRG to interview agencies such as STAR Ghana, USAID... read more 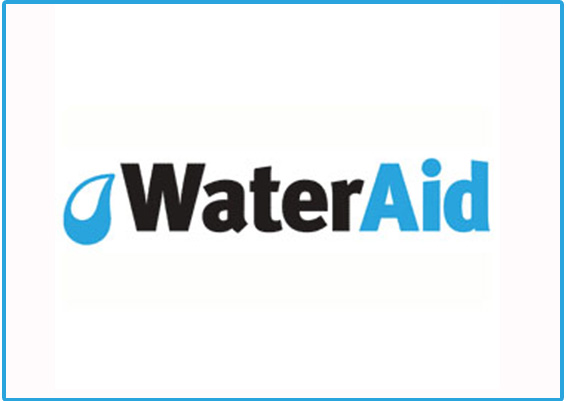 CHASE PETROLEUM
One of TCSRG most trusted and committed partners contracted TCSRG to undertake two major projects also in the first year. The first project was an Impact Assessment Study and document of all of the company CSR efforts since they embarked on CSR initiatives in 2007. This project required TCSRG to travel to many regions of Ghana including areas such as the far northern upper east... read more 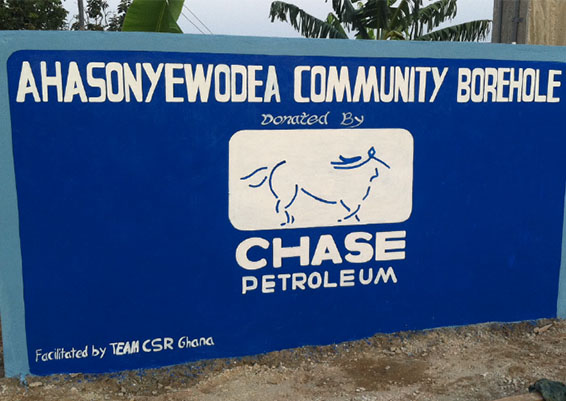 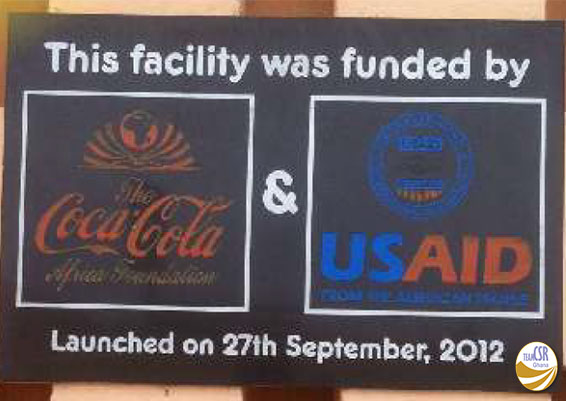